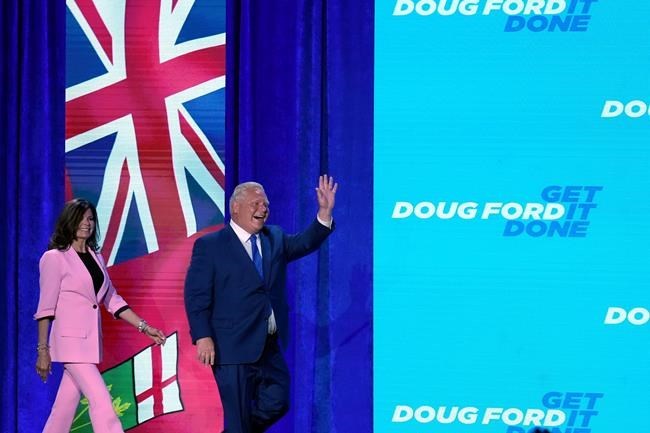 In The News is a roundup of stories from The Canadian Press designed to kickstart your day. Here is what’s on the radar of our editors for the morning of June 3 …

What we are watching in Canada …

Ontario’s main political parties are charting new courses forward today, with one heading into a second term with an even stronger mandate than before and two others searching for new leaders.

The Progressive Conservatives won a second majority Thursday night, leading to resignations from both Andrea Horwath as leader of the New Democrats and Steven Del Duca as leader of the Liberals.

The Tories won a startling 83 seats, even more than than the 76 they won in 2018 that was considered a “super majority” at the time.

The NDP formed official Opposition again, with 31 seats, while the Liberals failed to secure official party status for the second consecutive election with just eight seats.

Now, the PCs will turn their attention to delivering on their promises of rebuilding from the pandemic, while also adding some new faces to caucus.

For the NDP, the hunt is on to find a successor who can surpass Horwath’s legacy. The Hamilton-born daughter of an automaker ran in four elections, forming official Opposition for the first time in 2018 partly due to the stunning collapse of the Wynne Liberals.

The Liberals, on the other hand, will be looking for a leader who can present a new image for the party that isn’t affiliated with past missteps. Del Duca, a former Wynne cabinet minister, was unable to overcome his previous tenure during the campaign.

Candidates have until midnight to secure party memberships for their supporters to vote in the election for the next Conservative leader, who will replace Erin O’Toole.

The deadline marks a major milestone in the campaign and the start of a new phase in the race.

But not all memberships are created equal, at least when it comes to the final vote.

Each riding is worth a certain number of points, so candidates have had to be strategic about where they grow their base.

Pierre Poilievre, Patrick Brown, Jean Charest, Leslyn Lewis, Scott Aitchison and Roman Baber’s names will all be on the first ranked ballot in the fall.

Conservative campaigner Melanie Paradis says once the memberships have been processed and verified, the camps will turn their attention to getting out the vote and attempt to persuade their opponents’ supporters to switch allegiances — or at least put their name second on the ballot.

Advocacy groups are to weigh in on any progress made in the year since the federal government released a plan to end violence against Indigenous women, girls and gender diverse people.

The plan was developed in response to one of the 231 recommendations by the National Inquiry into Missing and Murdered Indigenous Women and Girls three years ago.

The Native Women’s Association of Canada is to release its first report card later today assessing the federal government’s progress.

The association was one of the groups working with Ottawa to draft the plan, but walked away saying the exercise was fundamentally flawed and politically motivated.

The National Family and Survivors Circle did participate in developing the plan and members from that group are also expected to speak today.

Prime Minister Justin Trudeau is to meet with survivors and take part in a private ceremony in the National Capital Region.

What we are watching in the U.S. …

CENTERVILLE, Texas _ A convicted murderer on the run since escaping a prison bus after stabbing its driver on May 12 was shot dead late Thursday after he killed a family of five and stole their truck from a rural weekend cabin, a Texas prison system spokesman said.

Gonzalo Lopez, 46, was “killed by law enforcement in Atascosa County. He shot at officers who returned fire killing him,” Jason Clark, spokesman for the Texas Department of Criminal Justice, said in an email.

The killing site is about 354 kilometres southeast of Centerville, Texas, about 180 kilometres north of Houston, near where Clark earlier said Lopez had killed a Houston family of five at their weekend cabin and stole their pickup truck.

Lopez was thought to be hiding in the vicinity of the cabin when officers received a call from someone concerned after not hearing from an elderly relative, Clark said.

Officers went to the family’s weekend cabin along Texas Route 7 west of Centerville about 6 p.m. Thursday and found the bodies of one adult and four minors, three of them children. Identities were not released, but gone was their white pickup truck, Clark said. Lopez was believed to have driven the truck from the search area, he said. Lopez was a former member of the Mexican Mafia prison gang and had ties to South Texas, he said.

Lopez met his end in South Texas, about 50 kilometres south of San Antonio.

The family, which was from the Houston area, was thought to have arrived Thursday morning at the cabin, which they owned, Clark said. The five are believed to have been killed Thursday afternoon and had no link to Lopez, he said.

Lopez, 46, had been the subject of an intensive search since his escape from the prison bus. He was being transported in a caged area of the bus from a prison in Gatesville, more than 160 kilometres west of the place where he escaped, to one in Huntsville for a medical appointment when he escaped in Leon County, a rural area between Dallas and Houston, the Texas Department of Criminal Justice has said.

What we are watching in the rest of the world …

SEOUL, South Korea _ U.S. President Joe Biden’s special envoy for North Korea said Friday the United States is “preparing for all contingencies” in close coordination with its South Korean and Japanese allies as it monitors North Korean arrangements for a possible nuclear test explosion that outside officials say could be imminent.

South Korean and U.S. intelligence officials have said they detected North Korean efforts to prepare its northeastern testing ground for another nuclear test, which would be its seventh since 2006 and the first since September 2017, when it claimed to have detonated a thermonuclear bomb to fit on its intercontinental ballistic missiles.

Sung Kim, the U.S. special representative for North Korea, was in Seoul for a trilateral meeting with his South Korean and Japanese counterparts to discuss the growing threat posed by North Korea’s nuclear weapons and missiles programs.

“The U.S. assesses that the DPRK is preparing at its Punggye-ri test site for what would be its seventh nuclear test. This assessment is consistent with the DPRK’s own recent public statements,” said Kim, using the initials of North Korea’s formal name, the Democratic People’s Republic of Korea.

Aside from co-ordinating with Seoul and Tokyo over contingency planning, Washington is also prepared to make “both short- and longer-term adjustments to our military posture as appropriate and responding to any DPRK provocation and as necessary to strengthen both defence and deterrence to protect our allies in the region,” Kim said.

Nuclear negotiations between Washington and Pyongyang have stalled since 2019 over disagreements in exchanging the release of crippling U.S.-led sanctions against North Korea and the North’s disarmament steps.

North Korean leader Kim Jong Un has expanded his ballistic missile program amid the diplomatic pause and a nuclear test would escalate his brinkmanship aimed at cementing the North’s status
as a nuclear power and negotiating economic and security concessions from a position of strength.

The Island of St. John was proclaimed as Prince Edward Island.

Jurors are to continue deliberating for a fourth day in the sexual assault trial of Canadian musician Jacob Hoggard, the lead singer for the band Hedley.

On Thursday, the jury told the court it could not reach a unanimous agreement on “some” counts, but was instructed to continue deliberating and went on to ask questions and review one witness’s testimony.

Hoggard, who is 37, has pleaded not guilty to two counts of sexual assault causing bodily harm and one of sexual interference, a charge that refers to the sexual touching of someone under 16.

The Crown alleges Hoggard violently and repeatedly raped a teenage fan and a young Ottawa woman in separate incidents in the fall of 2016.

It further alleges he groped the teen after a Hedley show in April 2016, when she was 15.

The defence argues the groping did not happen, and both sexual encounters were consensual.

Did you see this?

HALIFAX _ Ukrainian mother Yevheniia Alosha says arriving in Canada from Poland with her three-year-old son is overwhelming and brings her family closer to finding some peace.

“It’s amazing, I have no words for this. It’s really good,” she told reporters Thursday evening at the arrivals gate of Halifax International Airport. The two were among 319 Ukrainians who were aboard a plane as they fled the Russian invasion.

Her soon-to-be four-year-old son Daniiel was elated. With a small Canadian flag in hand, he bounced on his mom’s luggage.

“He is so excited, he thinks all the toys are here and kindergarten is here. He’s always asking me: “I want to stay here long, I want my room.’ He’s very excited about it,” she said.

The Aloshas, originally from Boryspil, a city east of Kyiv, were on the federal government’s third chartered flight carrying Ukrainian refugees to Canada.

But the Aloshas’ journey is not over. She and her son are among more than 30 people from this flight that will make their way to Newfoundland and Labrador. Alosha plans to settle in St. John’s.

“I hope to work. My son will go to kindergarten and we will have some peace,” she said.

Federal Immigration Minister Sean Fraser was among a number of politicians at the arrivals gate welcoming newcomers with chocolate, tartan and Canadian flags.

This report by The Canadian Press was first published June 3, 2022.