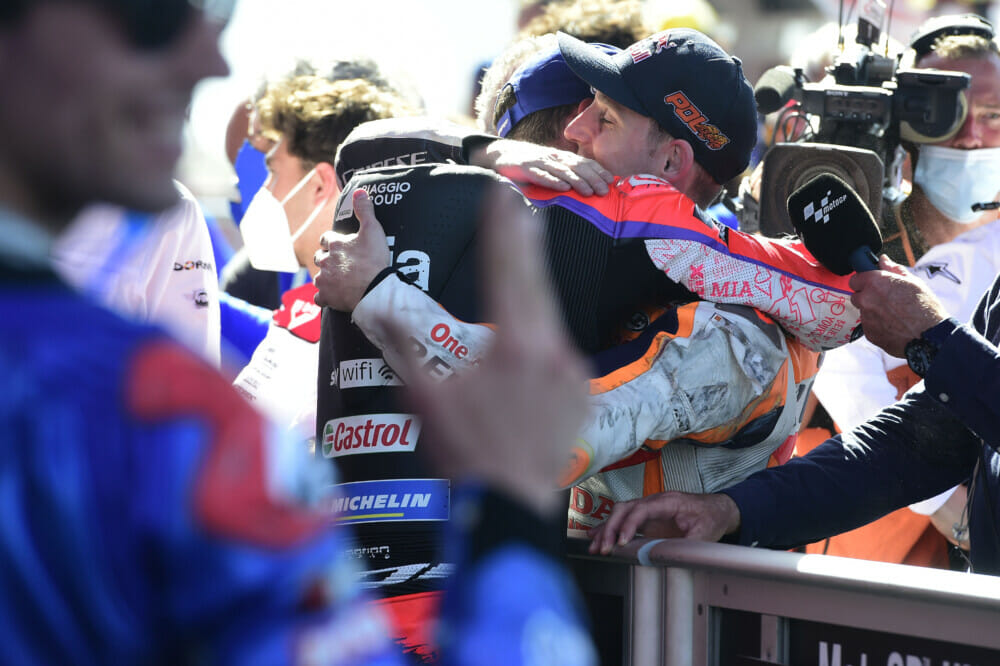 Aleix Espargaro (Aprilia Factory Racing) made a little slice of MotoGP history at the 2022 Argentine MotoGP, taking his and Aprilia’s first win in the premier category.

It was the Spaniard’s 200th MotoGP race and he made the most of it, shadowing Pramac Ducati’s Jorge Martin for the majority of the encounter before launching two unsuccessful bid for the lead at the end of the back straight.

Each time Martin would swoop back up the inside but it was a case of third time’s a charm as Espargaro made the race-winning pass with four laps remaining, easing away to a famous victory despite Martin refusing to give in. The margin of victory was 0.8 seconds.

Third went to Suzuki’s Alex Rins, who tried valiantly to close the gap to Martin in the latter stages of the race but came up half a second short.

Joan Mir made it two Suzuki’s in the top four, with Francesco Bagnaia saving a bit of face for the factory Ducati team by taking fifth after qualifying 14th.

Rounding out the top 10 was KTM’s Brad Binder in sixth, Maverick Vinales with his best showing as an Aprilia rider in seventh ahead of World Champion Fabio Quartararo (Yamaha), Marco Bezzecchi with an impressive showing on the Mooney VR46 Ducati in ninth and Enea Bastianini (Ducati) rounding out the top 10.

The result means Aprilia and Espargaro are now leading the world championship for the first time in the company’s history ahead of the Austin MotoGP next weekend. Espargaro sits on 45 points from Binder on 38 and erstwhile leader Bastianini drops to third on 36.

As last laps go, that was pretty special from Sergio Garcia (Solunion GASGAS Aspar Team) as the polesitter goes from P3 to P1 to claim a stunning victory at the Gran Premio Michelin de la República Argentina. Garcia passed both second place finisher Dennis Foggia and his Leopard Racing teammate Tatsuki Suzuki on the last lap to pick up his first win of the season, as Ayumu Sasaki (Sterilgarda Husqvarna Max) completed the podium despite a Long Lap Penalty.

Aprilia on top for first time in 21 years

Aleix Espargaro claimed Aprilia’s first premier class pole position since October 2000 on Saturday on the back of showing the strongest rhythm throughout FP2. He was, in the words of Fabio Quartararo, the “clear favorite.”

This was further evidence of the strides made by Noale engineers over the winter, when they further enhanced the bike’s top speed and turning. “I can brake late and make very high corner speed. It works well. It’s a special GP because just one day of practice, (but) the race pace is quite strong.”

Quartararo and Miller – the second duel

After coming together at the start of the Indonesian GP, Fabio Quartararo and Jack Miller were once again involved in a tete-a-tete after the Australian was touring on the racing line in qualifying as Quartararo approached turn seven at full speed.

Miller was handed a three-place grid penalty, and explained, “I don’t know what more they want from me – [after the crash] I swapped bikes, swapped leathers, trying to get comfortable with both… it’s not like I was intentionally trying to get in anybody’s way. But anyway.”

Quartararo had to abort his lap and felt that impacted his qualifying, as his soft rear tire wasn’t at its best after. “It’s one of the fastest places of the track [where I was impeded],” said the Frenchman. “I don’t want to complain because it can happen, maybe he didn’t see me. He was not really in the racing line – but when you arrive that fast, if you have someone like really in this position, it’s disturbing you. I think it’s not fair.

Aprilia’s stunning performance aside, Saturday was notable for title favorite Francesco Bagnaia’s near-meltdown in FP2 and Q1. From looking nervous over the track’s bumps to repeatedly throwing his hands into the air, the Italian cut a desperately frustrated figure.

His annoyance at riders seeking a tow blew up at the close of FP2, when he pulled to the right of the start-finish straight and braked in a straight line to a crawl. Luckily, no one was directly behind.

A stunning Saturday afternoon Q2 lap from Aleix Espargaro handed Aprilia Racing their first MotoGP pole position – and the Spaniard’s first pole position since the 2015 Catalan GP. Espargaro was joined on the front row are a pair of GP22 Ducatis in the form of Jorge Martin (Pramac Racing) and Luca Marini (Mooney VR46 Racing Team).

Pol Espargaro made it two Espargaro’s in the top four on the Repsol Honda, with Maverick Vinales having his best day yet as an Aprilia rider by taking fifth on the second RS-GP machine.

World Champion Fabio Quartararo was sixth, annoyed once again at Jack Miller as their feud from Indonesia continued. Miller was riding slowly on Quartararo’s first flying lap and caused the Frenchman to run wide, Quartararo making his feelings known towards Miller who would crash early in the session and could only manage 11th fastest on the factory Ducati.

It was a shocking day for championship favorite Francesco Bagnaia, who had recurring stability issues with his GP22 Ducati that saw him finish fourth in the Q1 session, meaning he’ll start the race from 14th, one place behind championship leader Enea Bastianini.

Despite the freight issues which led to the cancellation of Friday’s action, paddock heads were confident the plane grounded in Kenya would finally arrive in Argentina on Friday night. Two MotoGP teams – Gresini Ducati and VR46 Ducati – have no bikes or team equipment. Ducati was anticipating lending technicians to the teams affected in order to clean and rebuild the bikes before FP1 gets underway at 12.30 on Saturday.

Red Bull KTM’s Miguel Oliveira was also affected, as he is missing one bike, while Tech 3’s Raul Fernandez is missing two. “We have to condense the activity for Saturday which will be different and a challenge,” said Oliveira. “Especially for the mechanics but I’m just happy we can do something (after the delay).”

The news that front ride height devices, currently being used only by Ducati’s GP22, will be banned from 2023 onwards was unsurprisingly met with frustration from factory management.

“Obviously we’re disappointed,” Sporting Director Paolo Ciabatti said. “We’ve been trying our best to keep something within the regulations that can be used. We spent time and money developing it last year while our competitors spent their time trying to develop something else. We think it’s very unfair. It’s a story that’s repeating itself, from the winglets to the rear tire deflector.

“In this case I heard motivations we don’t agree with. The cost – we know that’s fully compatible with our budget. Some manufacturers spend high amounts on their riders. It’s p to them. But I don’t think they should criticize when we spend much less money on development. We heard about safety but we don’t see this as a fact.”

Honda and Michelin war rumbles on

The days after the Indonesian GP were marked by a war of words between Honda and tire supplier Michelin. The French firm’s decision to bring an old rear tire design to deal with high track temperatures badly affected the performance of all four Honda machines, with Marc Marquez suffering a highside that put him out of two races.

In Argentina, Honda’s riders had a further comment. Michelin’s head of two-wheel motorsport Piero Taramasso felt comments made by Repsol Honda team boss Alberto Puig, in which the Spaniard said he must “analyze the situation with Michelin,” were “unnecessary.”

But Honda riders wanted to ensure a repeat of Indonesia doesn’t occur in the future. “It’s something that they need to [improve] for the future,” said Alex Marquez. “Something that cannot happen again. To change suddenly the tire allocation, we had been there for three days of testing, because they asked for three days there to try the tires. We saw it quite clear that the tires didn’t handle to make 27 laps.

“For the future, I think it will be interesting to not change the allocation like that with the casing. If the tires cannot handle 27 laps, make the race shorter or a flag-to-flag as we saw in the past. But to change the allocation is not really fair. At the test, we also had blisters in the front (which weren’t changed for the GP).” 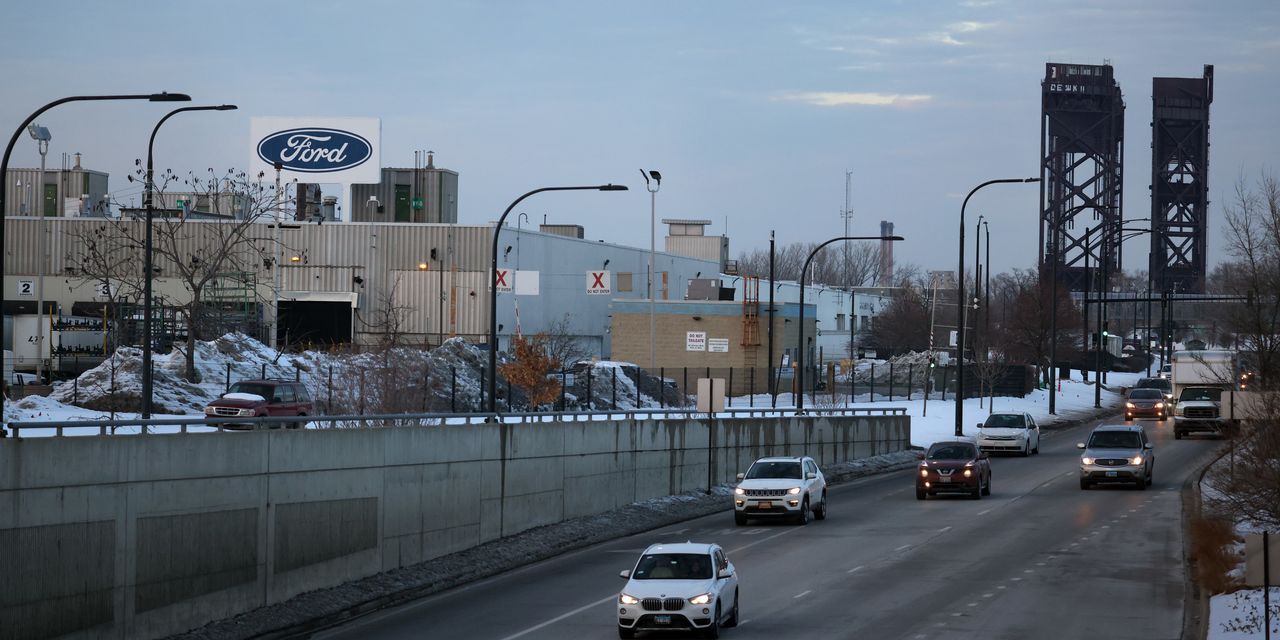 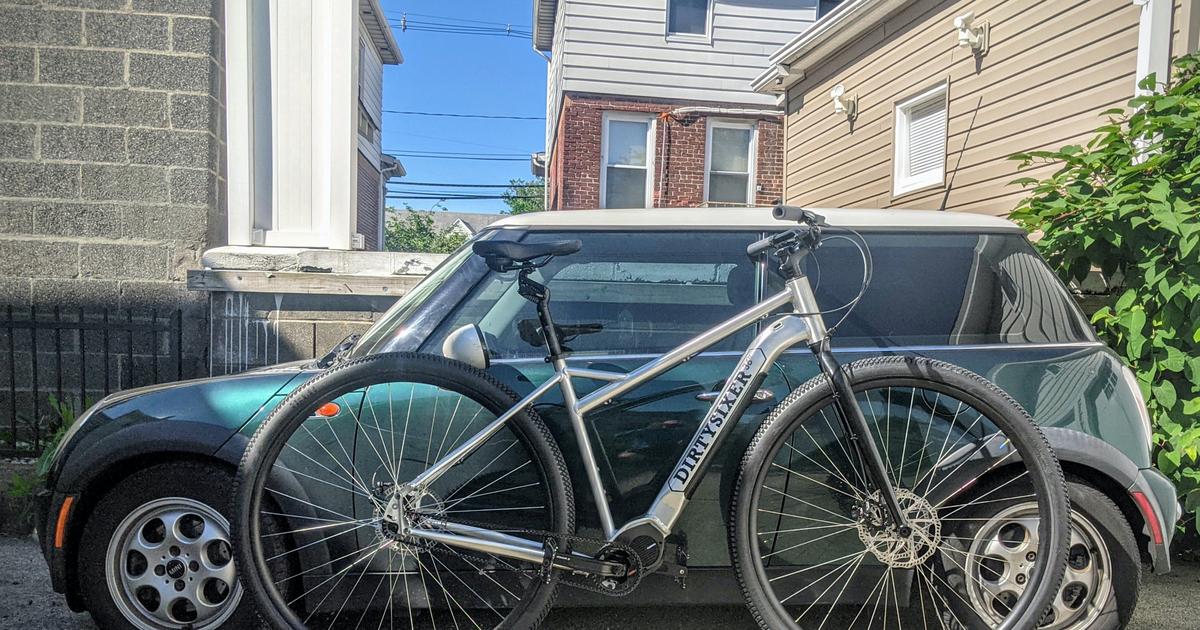