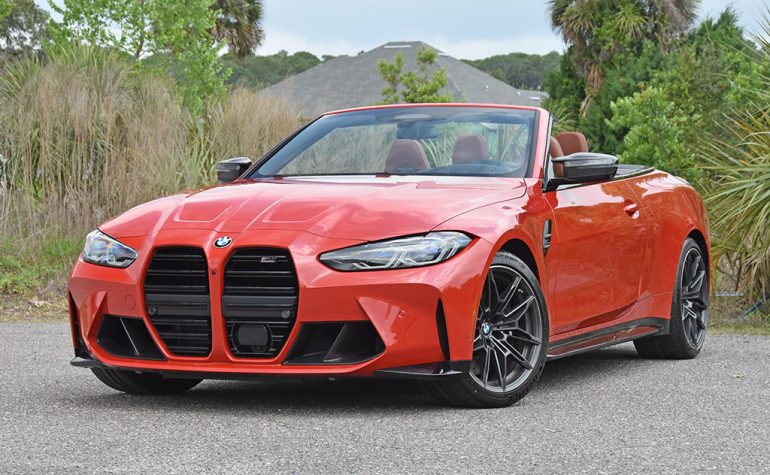 I’ve long been a BMW enthusiast after owning BMW vehicles in the past and I’ve waited patiently to get my hands on the new BMW M3 and M4 vehicles, especially the new BMW M4. Lucky for me, I get the M4 Competition this week but in its sleek convertible form.

While there’s the undeniable controversy of the front grille styling, there’s also a lot of performance substance that makes you forget about what other people may think of such an enormous and out-of-place grille the new M4 has. Is the large and “different” front grille enough to keep folks like me from buying a new BMW M3 or M4? In my opinion, it is – though after I kept driving the M4 Competition Convertible for many days I would be the one to bite the bullet and end up resorting to the aftermarket to change up the front end – because this vehicle is amazing in just about every other area! 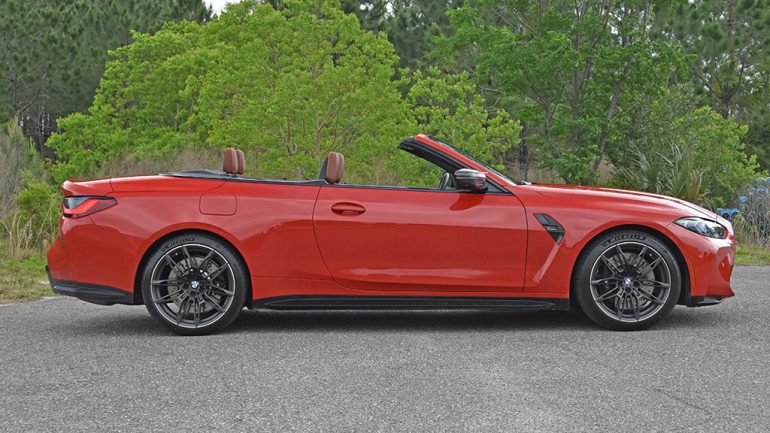 The business of the BMW M3 and M4 is found under its aluminum hood in the form of a 3.0-liter twin-turbo inline 6-cylinder, the delightful S58, producing 503 horsepower and 479 lb-ft of torque. That power is now directed to all four wheels first going through a snappy-shifting and direct-feeling ZF-sourced 8-speed automatic transmission, the only way the M4 Competition comes (you can opt for a 6-speed manual in the standard M4 Coupe or M3 Sedan with 473 hp and 406 lb-ft of torque). The xDrive all-wheel-drive system is remarkable in that there’s a transitional feeling where all four wheels just hook up without drama or fault, even in the bends when you’re pushing the M4 Competition Convertible hard. It’s not until you fiddle with the vehicle’s settings that things get edgy and somewhat raw with the exhaust valves opening, throttle response sharpening, gear shifts advanced, adaptive dampers firmed up, and added weight to the super-sharp and quick-ratio electric steering rack. You can even enable two-wheel-drive (rear-wheel-drive) mode with all the stability and traction control nannies off and light up the rear tires or perform stability-regulated drifts through an M Drive Analyzer system. 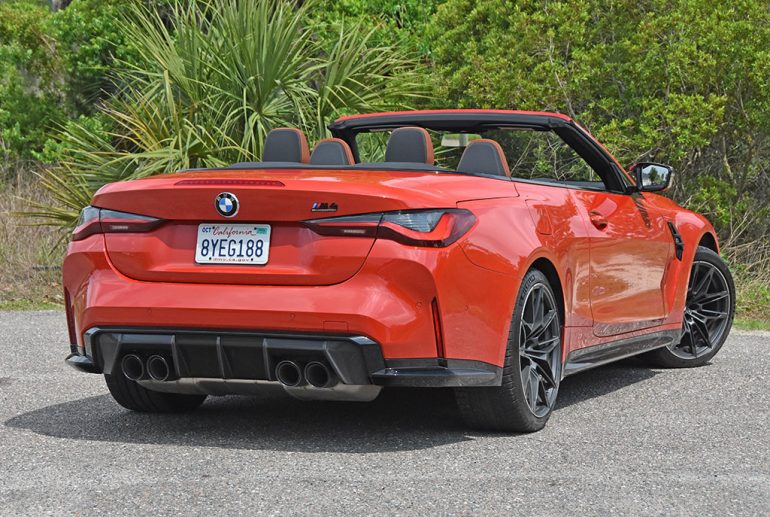 There are a plethora of vehicle drive mode configuration options with the first set being through more of a manual setup that can be preconfigured for the steering wheel M1 or M2 buttons. The other modes are a preset group that brings up a Sport or Track modes that modify the 12.3-inch digital gauge cluster for a unique display along with bringing up a large RPM readout on the color heads-up display and even blackout the infotainment screen for focused “track” mode sessions. 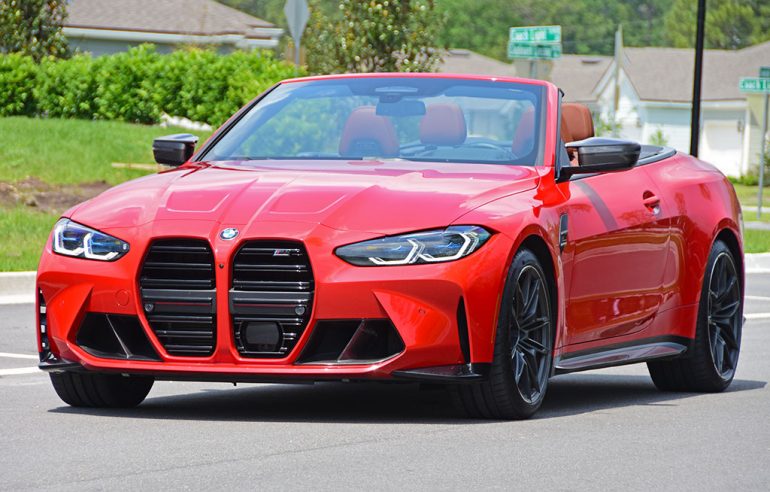 Overall, the new BMW M4 is a big vehicle compared to its predecessors, and in the M4 Competition Convertible, it almost feels like an M5 sans a bit of power. However, the power is super strong once you get past a momentary bit of turbo lag. To overcome that bit of turbo lag, there’s a unique launch mode that purposely builds turbo boost before it notifies you to launch the vehicle for a mad dash to 60 mph in just 3.6 seconds as claimed by BMW, which is 0.2 seconds slower than the M4 Competition Coupe. Funny enough, through my timing tests I was able to see a surprising best of 3.4 seconds to 60 mph, which leads me to believe that BMW has underrated the power figures once again – that’s not surprising considering how quick other M vehicles have been in the past.

There’s a weighted feel to the BMW M4 Competition Convertible, which I’m willing to bet feels different in the M3 and M4 coupe due to them weighing 466 and 327 pounds less respectfully than the convertible. That’s a huge weight difference, one that may change the overall dynamics of such a vehicle. Thankfully there’s a nicely tuned suspension setup, all-wheel-drive, and gobs of power to overcome the weight to the point that you don’t notice when accelerating. There’s a lot of power bandwidth in the M4 Competition and it’s not shy about unleashing the power and giving you a delightful exhaust note – especially with the top down. Dare I say the new M4 has a hint of E46 BMW M3 rasp sound near mid throttle followed up by deep baritones down low as the RPMs drop. It’s all delightful and addictive! 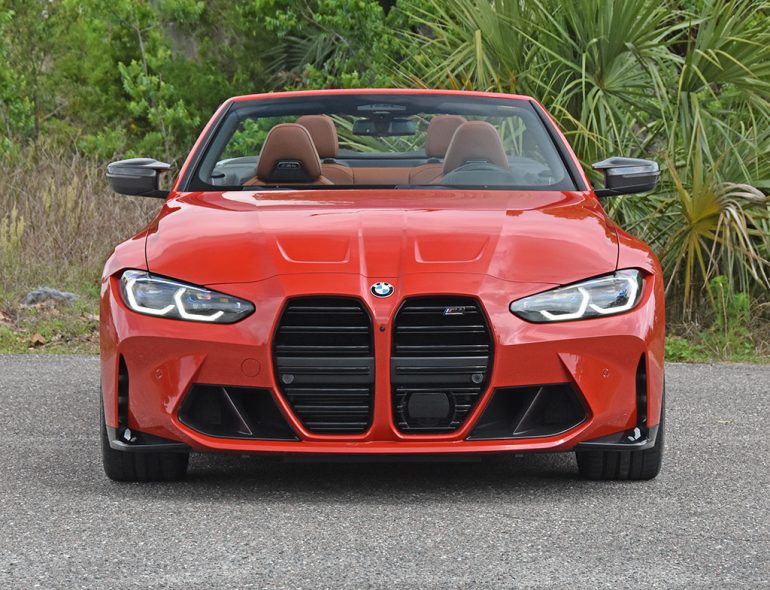 The BMW M4 Competition Convertible manages to muster out 23 miles to the gallon on the highway when you have the top up. The EPA estimates of 16 mpg city, 23 mpg highway, and 18 mpg combined are all easily attainable in the real world and sometimes I saw as high as 25 mpg when cruising at the speed limit on 55 mph highways. 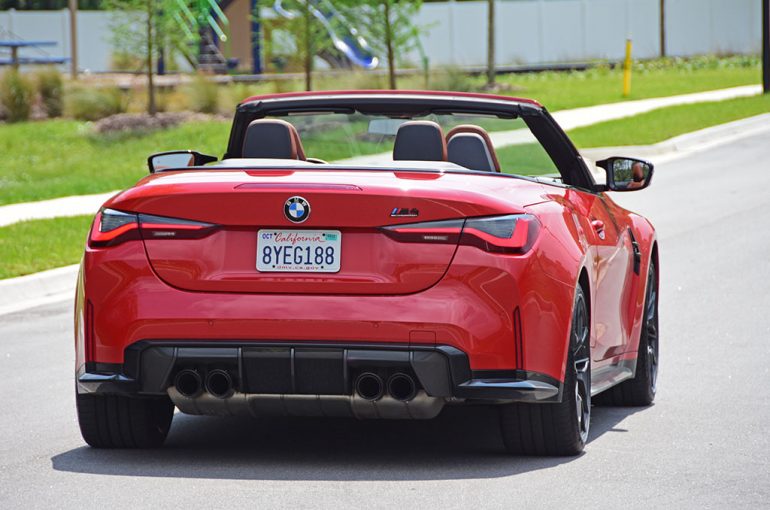 As a convertible, the M4 Competition prides itself on the insulation of the fabric top mostly isolating you from the environment almost like the M4 Coupe or any other 4 Series Coupe for that matter. The top is surprisingly quiet in its operation, almost silent, where it allows you to operate the folding action when traveling up to 31 mph. With the top down you can calm your cold climate worries by using the steering wheel heater, front-seat heating and ventilation at the same time, and the neck warmers that pump out warm air right under the front headrests. 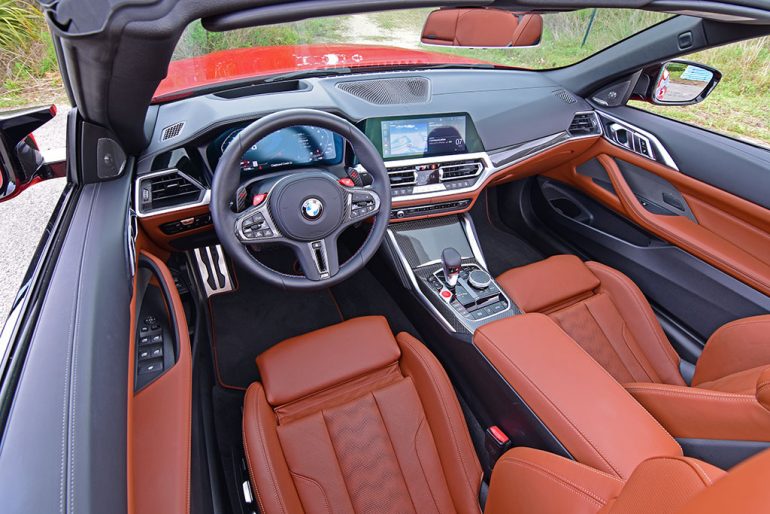 The dashboard is mostly what you expect in a modern BMW mimicking a traditional layout that’s worked well for an easy-to-reach 12.3-inch touchscreen powered by the latest iDrive 7.0 infotainment system that’s fairly straightforward with a short learning curve and the redundancy of the physical iDrive knob and buttons. The 12.3-inch digital gauge cluster is somewhat configurable and displays additional computer information on the M4 to give you readouts like the current tire pressure and temps, mostly pertinent information for such a performance vehicle. 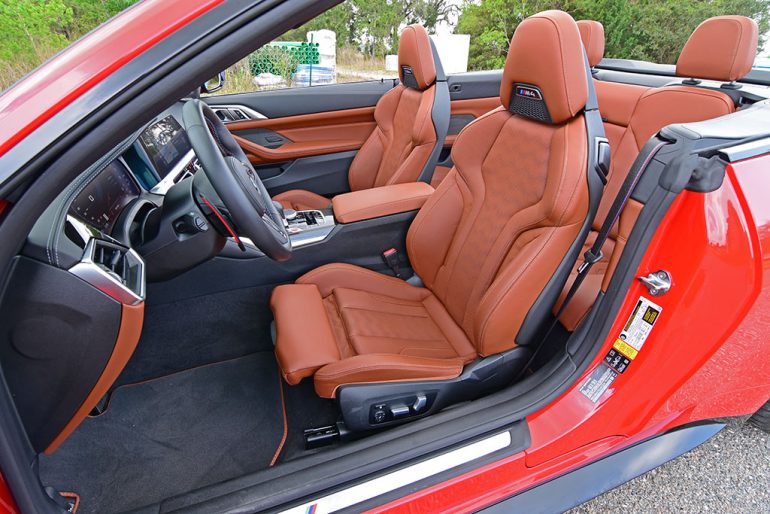 The seating areas are vast up front with plentiful front-seat travel and a manual steering column adjustment allowing you to easily find your optimal driving position. The back seats are short on space but allow just enough for two ‘smallish’ adults in a pinch. 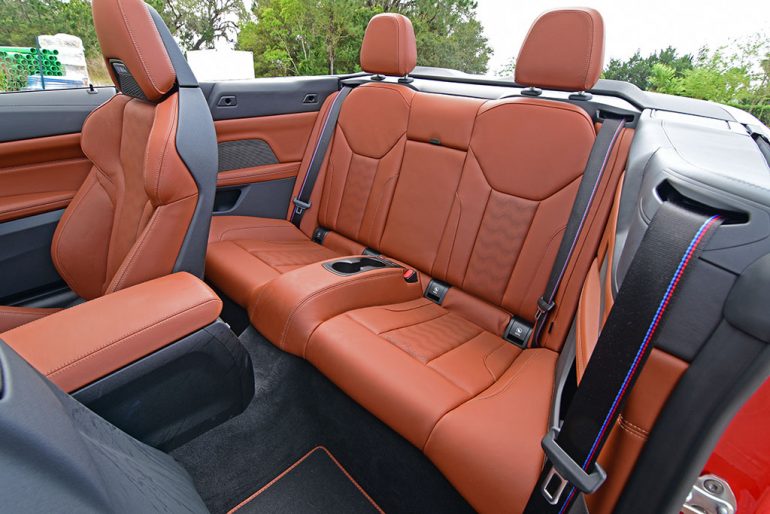 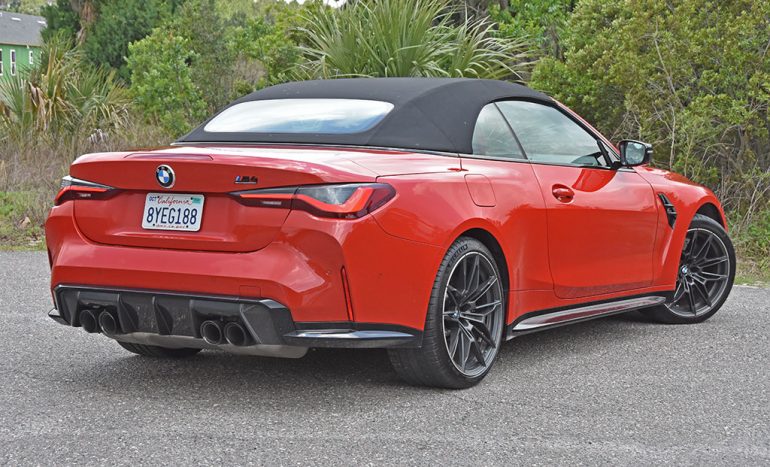 BMW isn’t shy about charging a premium for their M vehicles and the new M4 Competition Convertible is no different in nearly loading up my test vehicle with every option apart from the optional $3,800 carbon bucket seats and $8,150 carbon-ceramic brakes coming in at a total of $104,295. While that may seem like a lot, there’s a lot to chew and digest with such a vehicle, that is in some ways unique having those performance numbers, a drop-top, and a huge grille to match (I just can’t get over it – sorry!). The new 2022 BMW M4 only comes in a Competition variation and starts at $86,500 before any options or fees. Maybe an all-black M4 Competition is the key to ignoring that ‘special’ grille design – I might be game to give it a try because I like this thing!