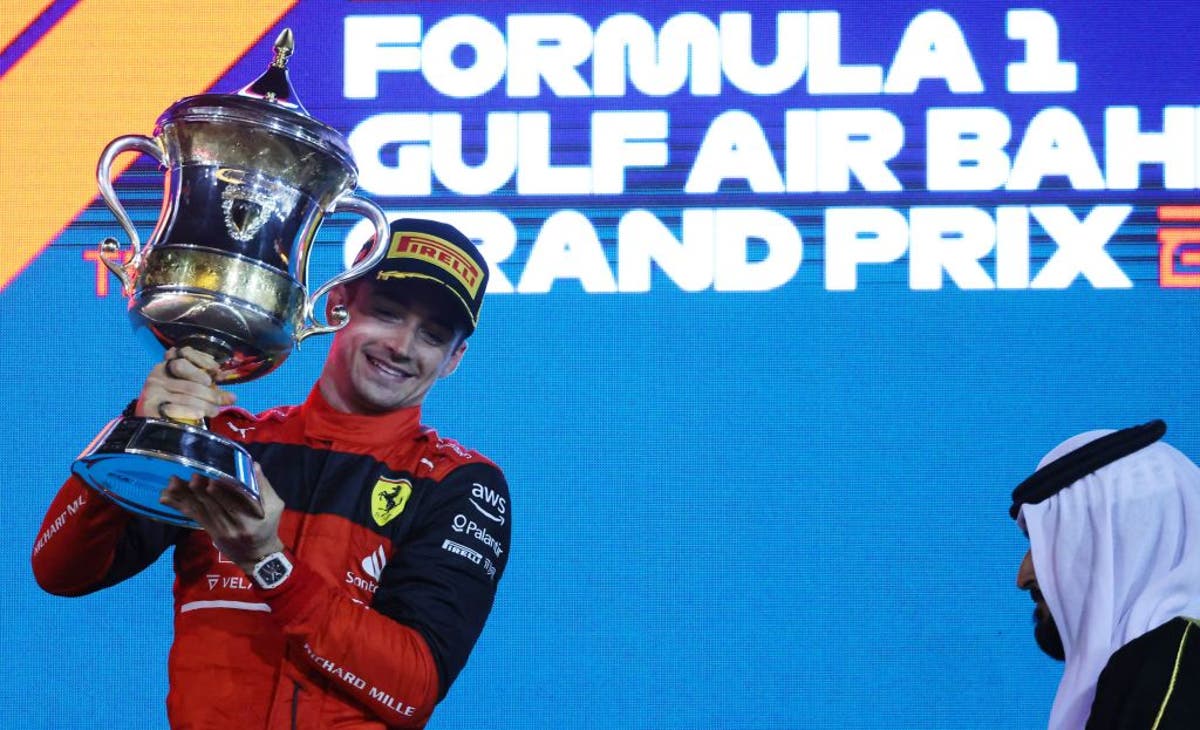 F1 races 2022: Take a virtual lap ahead of the Bahrain Grand Prix

Follow live race reaction from the Bahrain Grand Prix as the new F1 season got under way in thrilling style.

Verstappen hit technical trouble in the closing moments as Ferrari took a one-two finish, with Hamilton elevated to third after Sergio Perez suffered an engine failure in the other Red Bull on the penultimate lap. George Russell finished fourth, with Kevin Magnussen fifth.

Verstappen: “It looked like there was no fuel coming to the engine and everything just turned off.

“It is not what you want after a positive weekend. Second would have been a very good, but to retire at the end of the race is very disappointing.

“I always say to myself, ‘You always have to score points’. At the first corner I didn’t risk too much and the fighting with Charles was clean because I was happy with second.

“To lose so many points in the championship is disappointing where it can be very tight to the end, and these are important points.”

Hamilton: “Every point can make a difference. I have lost world titles by one point, but, while we are not necessarily on a par with the fastest guys, it is a really, really great result.

“Of course it was fortunate, but ultimately we have done a better job because we had better reliability. So I don’t say it is luck, but hard work.

“It is such a long season and it is going to be such a hard battle, but we love a challenge, I love a challenge and it is a privilege to work with a team that is hungry and focused on a common goal. There is no better feeling when you come together and have a result like this.”

Lewis Hamilton said every point counts as his surprise podium at Formula One’s season opener in Bahrain provided him with renewed belief that he can fight for a record eighth world title.

But Hamilton benefitted from a dramatic double Red Bull DNF as both Verstappen and team-mate Sergio Perez retired in the closing laps.

Hamilton was suddenly promoted from an underwhelming fifth to the final step on the podium, as Leclerc led team-mate Carlos Sainz home to claim Ferrari’s first victory, and first one-two finish, since the 2019 Singapore Grand Prix. George Russell took fourth in the other Mercedes.

“It’s a long, long season,” Christian Horner tells Sky Sports. “We’ve got to put it behind us.

“We’ve got a good car but we’ve got to address these reliability issues.

“The driving between Charles and Max is exactly we what we want.”

Charles Leclerc won the Bahrain Grand Prix and Carlos Sainz completed a sensational one-two for Ferrari as defending champion Max Verstappen failed to finish the season-opening race of the Formula One season.

Ferrari had not won a race in Formula One since the 2019 season but the Italian team looked to have made the biggest jump in terms of performance after displaying impressive pace in pre-season, and Leclerc converted from pole position to confirm that the Scuderia are set to be contenders once again this campaign.

“So happy,” Leclerc said. “The last two years have been incredible difficult for the team. We’ve started in the best way possible way. Thank you to the guys who have supported us. It’s great to be back at the top.”

“Ferrari is back, and it’s properly back with a one-two,” Sainz added. “The hard work is paying off and we are there.”

What a sight for Ferrari fans to see Leclerc back on top of the podium.

Lewis Hamilton: “Firstly, congratulations to Ferrari. Great to see them do so well again. They’re such an epic, historic team.

“This was the best result we could have got. It was tough on the other two drivers but we are grateful for the points.”

“So happy,” Leclerc said. “The last two years have been incredible difficult for the team. We’ve started in the best way possible way. Thank you to the guys who have supported us. It’s great to be back at the top.”

“Ferrari is back, and it’s properly back with a one-two,” Sainz added.

Leclerc wins driver of the day! Not a surprise. What a start to the season.

Ferrari’s last win in Formula One was in 2019. That was a one-two in Singapore.

AND THEY’VE DONE IT AGAIN IN BAHRAIN!